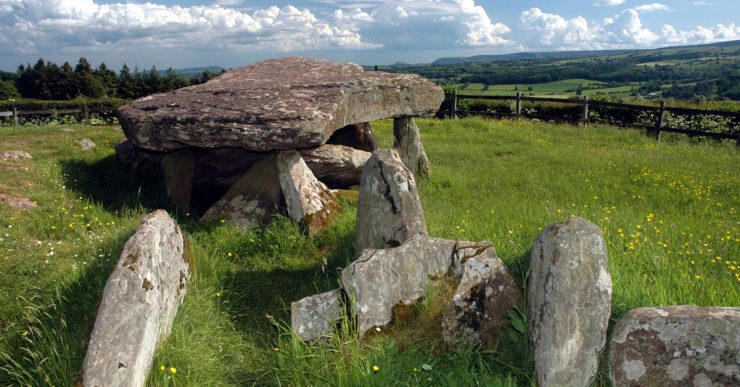 Arthur’s stone is found on an abandoned hilltop, outside the village of Dorstone. It dates back to the Neolithic period in 3700BC. This stone faces the Black Mountain in South Wales. The UNESCO World Heritage-listed site, known locally as Maen Ceti, has never been directly excavated, so people don’t know much about how it was erected in the first place. Other similar sites in the area that have been discovered with skeletons suggest it is most likely a tomb.

Since not much is known about it, recently a proper excavation to the south of the monument has revealed a lot about it. One of the facts is that it isn’t a single lonely hillside. The initial report, suggests that this monument is a part of a much larger ceremonial landscape. And it might have been covered by a mound of compressed turf, with posts to hold it steady. A reason it collapsed over time, is because the mound stretched into the neighboring field got rot with time. And to fix the structure, the mound was rebuilt but with a little different orientation than before. Interestingly, the second structure pointed to an area between Skirrid Hill and Garway Hill, the first mound likely faced Dorstone Hill.

Many different myths are surrounding these stones, of many includes King Arthur, the 6th century Welsh bishop, Saint David, etc. But none of these were confirmed by archaeologists. Though it isn’t the only oddly stacked rock in the UK, it is the most famous one. It might seem difficult and a lot tricky to build but that’s not entirely true.

Archaeologists always assumed that its massive capstone raised on a series of supporting stones and lesser chamber with a right-angled passage had stood within a wedge-shaped stone cairn, similar to those found in the Cotswolds and South Wales. However, Professor Thomas and Cardiff’s Prof Keith Ray showed the monument originally extended into a field immediately to the south of the tomb.

According to archaeologist Julian Thomas from the University of Manchester,

Each of these three turf mounds had been built on the footprint of a large timber building that had been deliberately burnt down. Indeed, the block of upland between the Golden Valley and the Wye Valley is now becoming revealed as hosting an integrated Neolithic ceremonial landscape.

The archeologists found that instead of stacking large stones on top of each other, the ground below the main rock was dug, to allow supporting rocks to slide underneath, and a long mound of dirt was added on top, all the way to the field of the south (place of recent excavation). So, it is believed that what we see today is only a fraction of what existed once. This discovery will help unfold the story of human origin.

Drought Could be the Next Pandemic