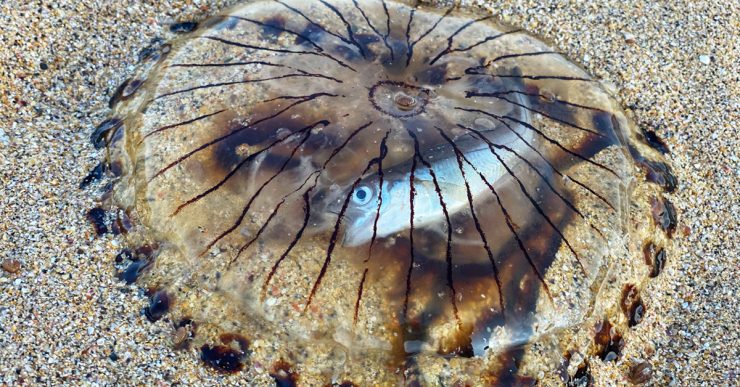 A photographer found a dead jellyfish while walking on a British beach, displaying through its transparent abdomen what may have been its last meal, a whole fish. Some young fish may take refuge from predators among jellyfish tentacles, however, in this case, it appears that the fish was swallowed by the jellyfish.

The fish, whose species is yet to be identified, was inside a compass jellyfish (Chrysora hysoscala), which has brown V-shaped spots that resemble compass lines. But the scene became inquisitive when the fish was still intact inside.

Local photographer, keep wildlife snapper, and diver Ian Watkin, during the early morning stroll, came across this strange-looking creature in Padstow, Cornwall, interestingly on National Marine Week. He couldn’t believe how lucky he was to found a fish inside a jellyfish, and that too on dry land.

He told The Daily Mail tabloid, “It’s not something you see every day.” “Unfortunately, it looks like it was attacked and turned into a Medusa lunch,” he said.

The one-of-a-kind picture was fortuitously taken during National Marine Week, an initiative set up by the Wildlife Trusts – a group of regional conservation groups in the UK – to highlight the unique marine life around the British coastline.

Because of the clear body of the Compass jellyfish, the fish that was stuck inside was visible.

Cornwall Wildlife Trust shared the fascinating image adding: “This Compass jellyfish was found washed up on Harlyn Bay Beach near Padstow with a fish inside its bell. Often jellyfish are used as nurseries by juvenile fish as they hide amongst their tentacles for protection from predators. Unfortunately, this one seems to have been stung and became lunch for the compass. Just look at how it occupies almost the entire width of the jellyfish’s bell!”

In December 2015 Tim Samuel and Franny Plumridge – the ocean photographers, took pictures of a yellow fish stuck inside a translucent jellyfish, while freediving in Byron Bay, off the east coast of Australia. Samuel was the one who spotted this inquisitive scene and posted the picture on his Instagram account, but when the Discover Ocean republished that picture, the image went viral. Not just that, the image is had made it twice to the trending list on Reddit. Samuel, wrote on his Instagram, “Woke up this morning to my phone going crazy due to one [of] my photos being reposted. It is crazy how much attention this little guy is getting.”

Rob Condon, an assistant professor at the University of North Carolina Wilmington, which houses the Jellyfish Database Initiative, says the jelly might be a hydromedusa.  “The importance of these types of associations are poorly understood but jellies are likely providing key ecosystem services that benefit the fish species in this regard,” Condon writes in an email. This particular type of Jellyfish grows almost 12 inches in diameter and is usually seen around the British water from May to October. They eat small fish and crabs. Though their sting is painful to humans, it’s not lethal to us. 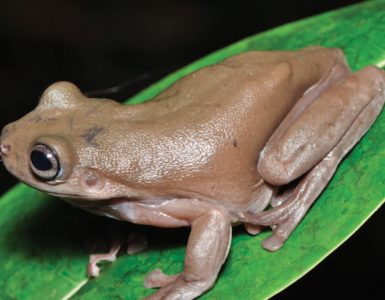