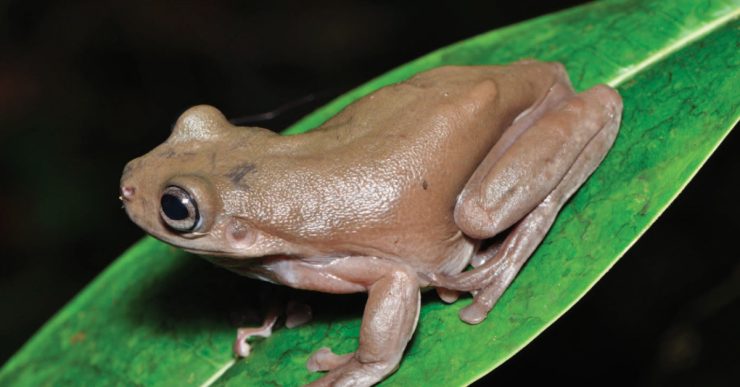 Australian scientists have discovered a snooping springing ‘chocolate frog’ in the rainforest of New Guinea. They named it so because of its distinctly brown skin color (like chocolate) instead of typical green frog skin. Though they are a lovely chocolate color they morphologically resemble the typical green frog of Australia in many ways.

Some 2.6 million years ago, in the late tertiary period, the land of Australia and New Guinea were linked. Both the lands dominate green tree frogs also known as Litoria caerulea. It is noteworthy here that New Guinea has mainly rainforest, while northern Australia has savannah. The team of researchers identified and studied these new frogs as reported in the Australian Journal of Zoology. And they have named this new Litoria frog species as ‘Mira’, in Latin, it means ‘surprised or strange’, as they believed that chocolate frog has a striking resemblance to Australian green tree frog and but they are surprisingly discovered in lowland rainforests of New Guinea. The biotic interchange between two regions could be the reason behind this confusion, and to understand this conflict, one should have a thorough understanding of the rainforest and savannah habitat and how they expanded and contracted over time.

Paul M. Oliver and the team were examining the natural habitat of the Australian green tree frog, from across the northern parts of Australia and New Guinea. These two regions are only 150 Km apart from each other and were once joined by a land bridge in the late Pliocene. The species in these regions were significantly intermingled in the past.

This studied provided the first phylogenetic and phylogeographic data for a nominal frog taxon of the Northern Australian and New Guinea, to date. In the published paper, the researchers reported that their “work provides evidence for both established and novel biogeographic hypotheses and, as we will argue, recognition of a previously undescribed species”. They collected frogs, recorded their sounds, and reanalyzed specimens that were previously collected. In the southern regions of New Guinea, the team found that the traditional L.caerulae have common features like those in North Australia. They also observed that L.caerulae wasn’t truly a caerulea, and have distinguishing features from other Litoria due to their large sizes, distinct brown uniform color, lack of white or yellow spots, and tiny skin patch on the edge of the eye. The researchers are excited about discovering this new species and believe that this new species would be widespread across New Guinea, as they prefer hot, swampy areas, neat to crocodiles, which can also make the exploration difficult for scientists.