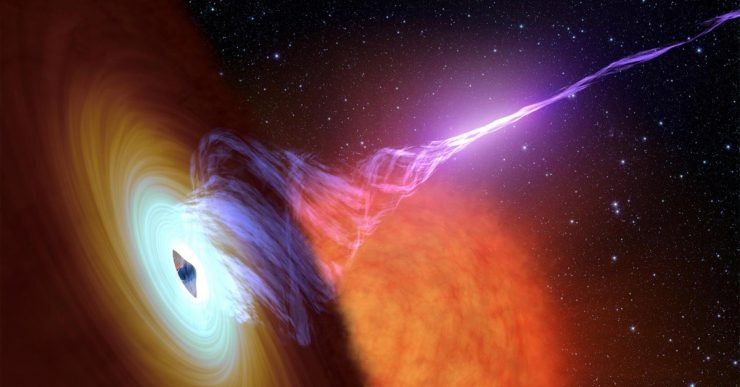 Researchers have shown that the massive gravity of a black hole bent X-ray echoes from around its back, fulfilling a prediction of Einstein’s theory of General Relativity, this is the first-ever recordings of X-ray emissions from the far side of a black hole. The findings are published in Journal Nature.

Stanford scientist Dan Wilkins noticed something new while observing X-rays emitted by a supermassive black hole in a galaxy 800 million light-years away from Earth. Using the European Space Agency’s XMM-Newton and NASA’s NuSTAR space telescopes, researchers were observing the black hole as it flung X-rays out into the universe. The black hole is about 10 million times more massive than our sun and is located in the center of a nearby spiral galaxy called I Zwicky, 1,800 million light-years away from Earth.

They observed series of bright X-ray flares, and later some smaller and different color flashes, which according to the scientists were “echoes” of light that appeared consistent with X-rays reflected from behind the black hole — a very strange place for light to originate.  Though black holes’ gravitational pull is so strong that not even light can escape, but it can ‘echo’, wrapping around it so that astronomers could see it.

Wilkins said in a news release,

Any light that goes into that black hole doesn’t come out, so we shouldn’t be able to see anything that’s behind the black hole. He explained that The reason we can see that is the black hole is warping space, bending light and twisting magnetic fields around itself.

Einstein in the year 1926 had predicted the ability of the gravity of a black hole to bend light, but it has been confirmed just now. Though this study was not attempted to prove Einstein’s theory Roger Blandford, a co-author of this study said, “Fifty years ago, when astrophysicists starting speculating about how the magnetic field might behave close to a black hole, they had no idea that one day we might have the techniques to observe this directly and see Einstein’s general theory of relativity in action.”

This recent observation could help Wilkins in figuring out the connection of his theoretical predictions about these echoes, which he has been working on for few years. He believes that the corona forms after gas fall into the black hole, thus a spinning disk is formed all around, just like “water flushing down the drain”. Later, the gas disk is heating to a much higher degree, creating a twisted magnetic field, that ultimately snaps, releasing a burst of energy and the corona. The astronomers are expecting to see different colors of X-ray echoes, and are planning to make a 3D map of the surroundings of the black hole, and possibly find to exact answer to how the corona produces such intense bright flares.