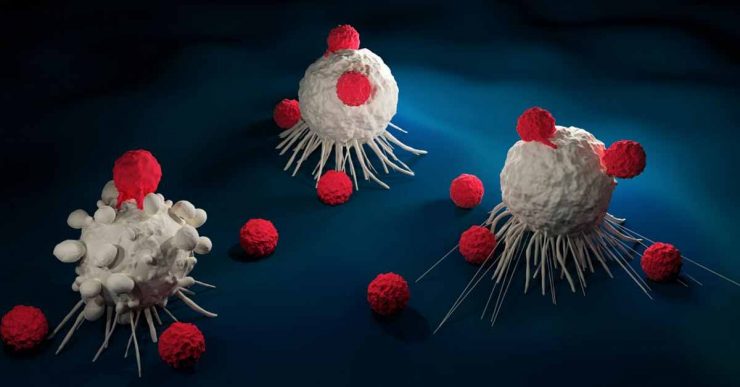 The researchers created their ‘Trojan horse’ nanoparticle by coating it with a specific amino acid — L-phenylalanine — that cancer cells rely on, along with other similar amino acids, to survive and grow. L-phenylalanine is known as an ‘essential’ amino acid as it cannot be made by the body and must be absorbed from food, typically from meat and dairy products.

However, such strict dietary regimes would not be suitable for all patients, including those at risk of malnutrition or those with cachexia — a condition arising from chronic illness that causes extreme weight and muscle loss. Furthermore, compliance with the regimes would be very challenging for many patients.

Seeking to exploit the amino acid dependency of cancer cells but avoid the challenges of strict dietary regimes, the NTU researchers devised a novel alternative approach.

They took a silica nanoparticle designated as ‘Generally Recognized As Safe’ by the US Food and Drug Administration and coated it with L-phenylalanine, and found that in lab tests with mice it killed cancer cells effectively and very specifically, by causing them to self-destruct.

The anti-cancer therapeutic nanoparticle is ultrasmall, with a diameter of 30 nanometres, or approximately 30,000 times smaller than a strand of human hair, and is named “Nanoscopic phenylalanine Porous Amino Acid Mimic,” or Nano-pPAAM,

Their findings, published recently in the scientific journal Small, may hold promise for future design of nanotherapies, said the research team.

Assistant Professor Dalton Tay from the School of Materials Science and Engineering, lead author of the study, said: “Against conventional wisdom, our approach involved using the nanomaterial as a drug instead as a drug-carrier. Here, the cancer-selective and killing properties of Nano-pPAAM are intrinsic and do not need to be ‘activated’ by any external stimuli. The amino acid L-phenylalanine acts as a ‘trojan horse’ — a cloak to mask the nanotherapeutic on the inside.”

“By removing the drug component, we have effectively simplified the nanomedicine formulation and may overcome the numerous technological hurdles that are hindering the bench-to-bedside translation of drug-based nanomedicine.”